A new year means a new weight-loss goal, right? Many of us make resolutions to lose weight or get in shape because we know we’ll feel better when our bodies are functioning properly. We make plans to transform our bodies into a calorie-consuming furnace. With three fruits and two vegetables in our tummies, we hope to win money for our “Before” and “After” pictures in the next six weeks.

Some of our favorite fairy tales sponsor programs to help us achieve their fictitious but desirable body image. Did you know Snow White can slim away the pounds via her weight management formulas? I didn’t either. She also comes in Ice Lighting and Frozen Berry flavors.

It isn’t just the princesses that gender ideas about body types. Many fairy tale characters are associated with a specific look. Certain fairy tale godmothers, for example, are often depicted as plump elderly women. Lovable and well-meaning, these huggable figures are ready to comfort their damsels in distress. 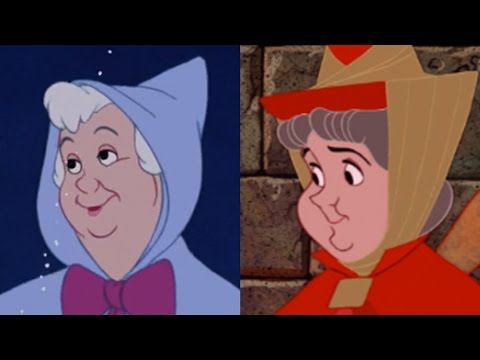 Fairy Godmother and Flora the Fairy

Interestingly enough, these round characters are also a little air-headed. Cinderella’s fairy godmother frantically shakes out her robes trying to find her elusive wand (Cinderella, 1950), and the good fairy Flora initially intends to turn the baby princess into a flower to escape Maleficent’s curse (Sleeping Beauty, 1959). This translates into personality traits that we subconsciously assign to others based on their body type.

Physical appearances are important to us, and they reach beyond how many chins we have in that family Christmas card. We rely on first impressions to spark hormonal attraction or create friendships with a perceived personality type. But does a slender, fit body mean you are a good person on the inside? The villainesses Lady Tremaine (Cinderella, 1950) and Maleficent (Sleeping Beauty, 1959) have high cheekbones, tiny waists, purple eye shadow, and pointy, witch-like chins. Their slender exteriors have rigid lines that denote a harsh coldness and lack of sympathy in their interiors. So does skinny actually equal scheming?

(I recommend watching this informational comparison of the two villainesses and the story of the talented actress that played both parts.)

In many fairy tale retellings a character’s morality can be judged on the basis of their physical appearance. Of course, this doesn’t hold true for every character. Mother Gothel in Rapunzel has a young, curvy, and attractive body—and she knows it, which is why she keeps Rapunzel locked up in the tower to maintain her youthful appearance (Disney 2010). Mother Gothel admiring herself in the mirror–incidentally moments before she sings her infamous motif that “Mother Knows Best” and suggests Rapunzel is “getting kind of chubby.”

And let’s not forget that the Queen of Hearts from Alice in Wonderland is built like the fairy godmothers—and though she’s just as incompetent, she is not nearly as nice (Disney 1951). But we cannot ignore that Disney and others chose to keep many of these body stereotypes as iconic images in their live-action re-releasings. Cinderella is still a size zero, Maleficent retains her angular cheekbones, and the Queen of Hearts now appears with an oversized head.

Body image affects how we perceive others. But most importantly it affects how we feel about ourselves because this influences our actions—like announcing in January our resolution to run the Boston Marathon or hike the Tetons this summer. We can be athletic protagonists or love-handled fairies this year whether or not we make good on our promises to ourselves once the Valentine’s chocolate tempts us. Just don’t expect overnight transformations into the fairy tale figures we see on TV. It isn’t as easy of a process in real life as it is for these girls:

This entry was posted in Uncategorized and tagged Alice in Wonderland, character portrayals, Cinderella, Not Television, Visualizing Wonder, Weight-Watching. Bookmark the permalink.